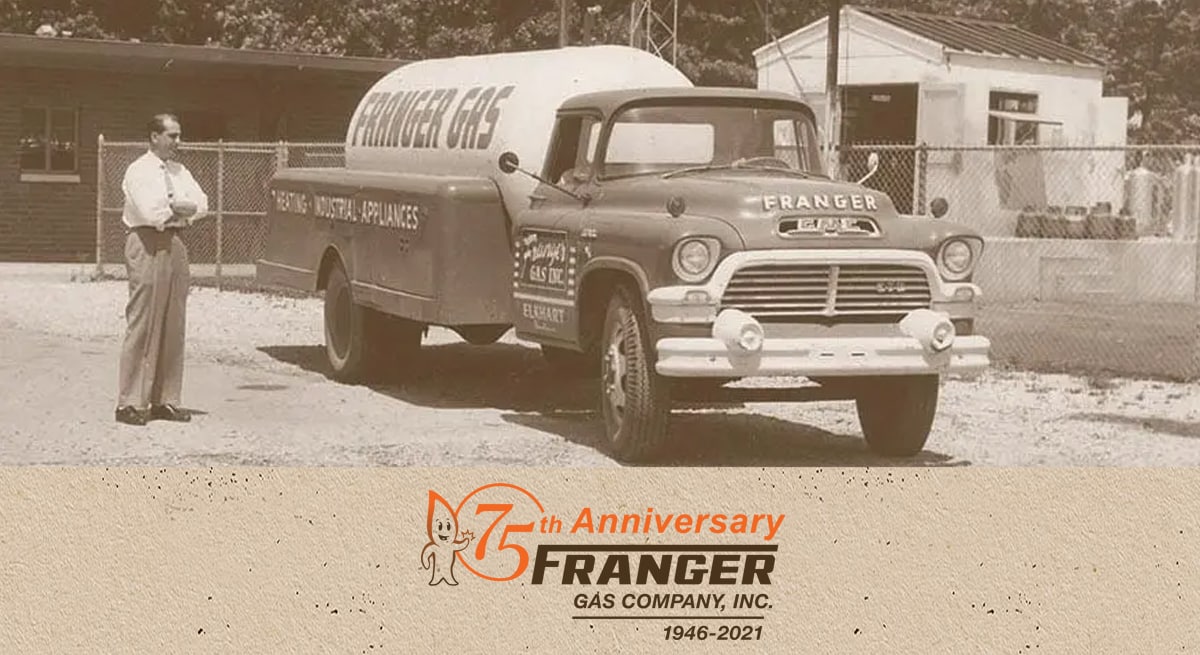 We are thrilled to be celebrating our 75th Anniversary in 2021. 75 years in business – we are so proud of this accomplishment. As we look back at our company history full of success – we wanted to share some thoughts about the journey.

“As a part of the 3rd generation of my family involved in this business, it continues to be very fulfilling to watch our growth continue. We find in an environment surrounded by large companies, with call centers out of state, there is a desire to do business with locally owned operations.  Franger Gas is striving to keep offering what our customers request:  great propane delivery service at competitive price points.  Call us – we answer the phone!”

75th Anniversary: A look at how it all began

In 1946, after serving his country in the United States Navy, Edward Franger started Franger Bottled Gas Company with relative John Foster. They began supplying our returning World War II veterans with propane appliances and fuel for their homes. As a result of the petroleum shortages of  World War II, a market for appliances – especially appliances fueled by Propane– grew.

As soldiers returned home and started families, business grew rapidly.  In 1950, Mr. Franger and Mr. Foster split the business – each focusing on their own area of interest.  Mr. Franger aimed his efforts at delivering liquid propane to his customers while Mr. Foster wanted to concentrate on appliance sales and service.  Mr. Franger purchased land on the Old Ft. Wayne Road (now County Road 10) and built the Elkhart, Ind. plant, with the company being renamed Franger Gas.

The propane industry grows, and Franger Gas grows with it

Not long after this, Franger Gas opened a plant in Plymouth, Ind. and another in Akron, Ind.  With all this growth, an opportunity to enter the wholesale propane business emerged.  We acquired one of the largest propane hauling tanker trucks in the state of Indiana. We then began marketing to other propane retailers.  Bottled gas became Bulk gas, with the demand for residential 500 gallon and 1000 gallon tanks growing as propane furnaces and water heaters became very popular.  Also, farming found uses for propane, irrigating crops in Spring and drying grain during the fall harvest.  When fork lift trucks began running on propane in the 1950s, Franger Gas became a major supplier to businesses in Elkhart County.

Franger Gas’s business footprint had grown enough that we were now able to buy direct from major oil company refineries in Chicago, Ill. and Toledo, Ohio.  Additional transport trucking was acquired to accommodate an increase in sales to other propane marketers in the Indiana, Southwest Michigan and Western Ohio regions.  Franger Gas sold off all transport trucks in the 1980s but remained in the wholesale business and saw continued growth.

With retail growth continuing, Franger Gas purchased land in Jones, Michigan in the 1970s and built a new bulk plant to service customers in the Union, Vandalia, Cassopolis and Three Rivers areas.  Our newest addition arrived in 2016 when AllPro Gas, based in Goshen, Ind., merged with Franger Gas.

In the fall and winter of 2013 and 2014, there was a significant disruption in propane supply regionally.  A large grain-drying demand and very cold weather depleted supplies. The result left many terminals in the Indiana, Michigan, Ohio and Illinois region with little to no gas for long periods of time.  As Spring arrived, the pipeline-fed terminal in Milford, Indiana announced that it would no longer supply propane.  To help meet the need in our region, Franger Gas partnered with a trusted supplier and built the rail-supplied Mentone Propane Rail Terminal.  While not having the capacity of the Milford terminal, the Mentone terminal has become one of the most efficient options in the region.  Low loading times and zero detention time has made the rail terminal very popular with transportation companies looking to get fuel loaded and back on the road quickly.

Franger Gas has come a long way in our 75 year journey!  We have built multiple plants, brought a rail terminal to the region, and entered many new markets.  We have continued to invest in growth to serve more and more customers.  Integrating new technologies has made us more effective for our customers’ needs.  We continue to evaluate all aspects of our business and finding solutions to serve you – our residential, commercial and wholesale customers. And every step of the way, we remain focused on living out our motto:  “Large Enough to Serve, Small Enough to Care!”

Thank you for being part of our journey.  We’re excited as we continue towards another 75 years!

Contact Us to become a Franger Gas customer today

Benefits of fueling your whole home with propane

Propane is a versatile and all-in-one energy fuel package for maximum efficiency, performance and comfort, both indoors and outdoors.

Propane can help you avoid headaches and frustrations with a power outages, but there are still safety precautions we want customers to take.

Propane tank exchange vs. refill — which is better for you?

The choice between propane tank exchange versus refill has two main arguments: convenience and cost savings. Without a doubt, refilling your propane tank is more cost-effective – but let’s take a closer look at the choices.

How to recertify your propane tank

Propane tanks are good for 12 years from the date of manufacture. After that, propane tanks need inspection and recertification every 5 years.

Switching your propane provider to Franger Gas is simple and rewarding. In just three easy steps, you can have the best propane service around.

Act now for savings on your Propane Bill

Energy prices don’t have to be terrifying. Our Guaranteed Price Program is a budget billing program to give you a predictable propane bill.

Preparing for the Rising Cost of Energy and Battling Pricing Shock

Energy costs are rising – and the price of heating your home is higher than ever. Regain control with propane and smarter habits with help from Franger Gas.

Choosing the Right Heating Source for your Home

Choosing the right heating source for your home is a big decision. Read on to discover if natural gas, propane or electric heating is best.

Refer A Friend to Franger Gas

As the coldest months of winter approach, it’s typical to begin thinking (or rethinking) your home heating situation. We all want to be assured that our loved ones will be warm and safe when winter is at its harshest. Our Refer a Friend program can do just that! Keep reading to learn the many benefits of propane as your heat source — and how to Refer a Friend to our program.

What a year 2021 has been! We celebrated our 75th Anniversary and have so much to be grateful for as we head into 2022.  Our customers have given all of us at Franger Gas Company so many reasons to say “Thanks!” You continue to trust us to provide your...
Read More

The difference between Natural Gas and Propane

What is the difference between natural gas and propane? Is switching from propane to natural gas the right move for your home?

Franger Gas Wholesale has been the go-to wholesale propane supplier for retail propane marketers and farmers for over 75 years.

Remote Propane Tank Monitoring: A Solution for Our Propane Customers

***Budget billing sign up is over for 2021.*** Ready for convenient, predictable, guaranteed pricing you can count on for your energy needs? Set up a budget billing account with us and know your monthly propane bill amount will be the same each month. Budget billing...
Read More

Reinvesting in the future with a focus on propane supply

How does a propane company continue to grow in strength and reliability? By continuously sourcing consistent supplies of fuel.

That’s what we do every day at Franger Gas Company. We saw a potential supply problem following the winter of 2013-2014 and partnered with a supplier to build the Mentone Propane Rail Terminal.

As we come to the end of one of the strangest years ever, this is the perfect time to reflect on a word that doesn’t get used often enough: gratitude.  Our customers have given all of us at Franger Gas Company so many reasons to say “Thanks!” You continue to trust us...
Read More

Does your construction project timeline include work during cold weather? Temporary propane-powered heat keeps your project on schedule, even during the coldest months of the year. 8 reasons to choose propane for temporary heat Why propane? It's a clean-burning, green...
Read More

How to get your propane tank ready for winter

Keep your family warm and safe. Here are simple tips to keep your propane tank in top condition and ready to fuel the heat this winter.

A disruption in our energy supply can be concerning. Franger Gas works hard to ensure reliable supply, no matter what happens with demand.

7 tips to help you brush up on propane gas grilling

Brush up on propane gas grilling with tips from Franger Gas to make sure your grill and fuel supply are ready for barbecue time.

Franger Gas Company is responding to the circumstances surrounding the novel Coronavirus labeled COVID-19, and how it impacts our business and our customers. Your safety, and the safety of our employees, is what matters most at this time.

Note: budget billing sign-ups have ended for 2020 Sign up now to start budget billing on May 1 **Please note, if you are already on the budget, there is no need to sign up again.  You will automatically be re-enrolled for the next season beginning May 1.**   At...
Read More

Propane is a safe and widely used fuel. It is nontoxic and produces minimal emissions. Propane is produced from both natural gas processing and crude oil refining, in roughly equal amounts.Propane is a hydrocarbon and is sometimes referred to as liquefied petroleum...
Read More

Winter is coming. Are you ready?

Prepare your Propane Tank for Winter with these tips from Franger Gas
In Indiana and Michigan, our home heating customers know two things for sure about the winter months – winters here are brutal, and propane does the job when it comes to keeping your family warm.

What happens if you run out of propane?

Don't run out of gas! Serious safety hazards, including fire or explosion, can result. It also could lead to frozen pipes, out-of-gas charges and inconveniences. Air and moisture may cause rust... Air and moisture could get into an empty or depleted storage tank,...
Read More

Leaks: What to do if you smell gas

1. No flame or sparks Immediately put out smoking materials and other open flames. Do not operate lights, appliances, telephones, or cell phones. Flames or sparks from these sources can trigger an explosion or a fire. 2. Leave the area immediately! Get everyone out of...
Read More